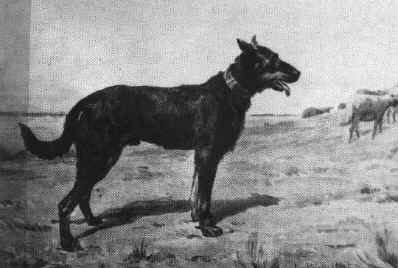 The ancestors of the beauceron were herding dogs. Originally, they were used to protect the herds against predators. Later, in the Middle Ages they were also used to drive herds.

The Beauceron also called Shepherd of Beauce is one of the oldest french breed. The strain of dogs that have contributed to the creation of the Beauceron goes directly to Canis palustris whose existence is located in Stone Age.

In 1809, Father Rozier in his farming lesson, make reference to the development of two varieties of sheepdogs for different uses, including a mastiff and a dog of lowland.This is the first description of what could be the ancestor of the Beauce.

In 1863, a report of the first dog show held in Paris made reference to the Beauceron for the first time. Thereafter, there are other indications of Beauceron in the writings of Pierre M�gnin, a military veterinarian whose work on the sheepdog breeds are references.

In 1893, a first Beauceron is registered in the LOF (French Book of Origins equivalent of American Kennel Club).

In 1911, the Club of Friends of Beauceron is created by a specialist (M. Siraudin), and two veterinarians M. Heroult and M. M�gnin.